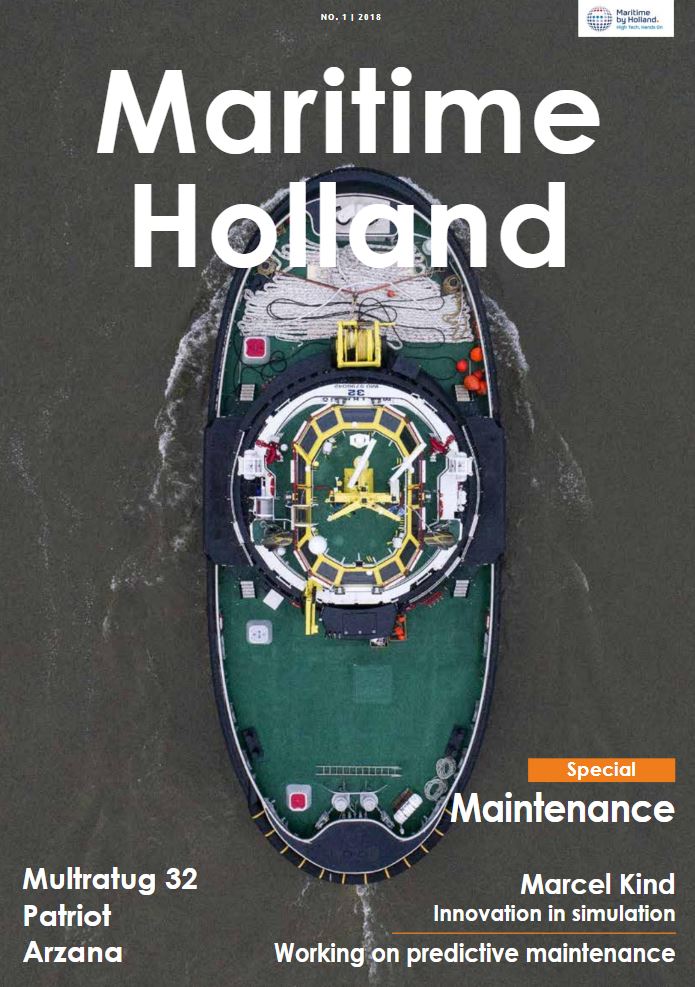 Marcel Kind is the co-founder of Simwave, a maritime simulation centre, based near Rotterdam.

“We hope to bring the industry together. Working with each other is very important if we want to keep the Netherlands an innovative maritime nation.”

Seen from the outside, the building that houses the company looks like an ordinary office. But looks can be deceiving. Inside the building in Barendrecht, a suburb of Rotterdam, pilots from Sri Lanka are manoeuvring ships into the harbour of Colombo, construction work is taking place on jetties in Africa and an emergency situation on a cruise vessel in the Caribbean Sea is being dealt with.

Simwave is a maritime training centre equipped with simulators that cover different aspects of the maritime cluster, from the cruise industry to the dredging sector.

“With our range of simulators we can assist each maritime company with their specific needs,” says Marcel Kind, Managing Director and co-founder of Simwave.

At the moment, 59 simulators are operative, simulating workplaces like the engine room and the bridge to handling liquid cargo.

The goal of Simwave is to improve the knowledge, skills and attitude of the workforce.

“Companies can book time on the simulators. They can also hire us to give mandatory training,” says Kind.

“Our centres are open 24/7 and companies can also bring their own instructors. We take care of all technical, operational, didactical and hospitality support.”

Simwave will also facilitate a hotel in the building.

Safety and environmental legislation at international and national levels are increasing. According to Kind, it is often thought that compliance is the main contributor to safe operations.

“But you want more than just a mere statement of ‘compliance’ in order to develop and maintain safe operations,” he says.

Progressing from compliance towards competency means that crew members have to know what to do (knowledge), how to do it (skills) and actually do it (attitude).

“Here is where assessment comes in. These assessments on our simulators are often tailor-made for a specific situation. At Simwave, companies can improve the quality of their personnel without investing in several simulators, virtual reality solutions and didactical methods. It is cost effective.”

Marcel Kind is walking around the new centre showing the various simulation areas. A bridge is recreated, with all workstations available, even on the wings. A 360-degree projection makes the experience so real that some users get seasick. Located next to the bridge is an engine room where simulations can be executed.

“The two can be linked so that we can train for a situation where the engine room and the bridge have to work together.”

Down the hall, in a dark room, the bridge of a tug is recreated. The systems can be linked so that a simulation on a containership between bridge and engine room is possible, but also between the ship and a tug.

“In total five or six simulators can be linked. It is possible to create an emergency situation in a port where several parties have to communicate and work together.”

To do this, Simwave uses the newest software on the market from Kongsberg Digital.

At the time of the tour of the facility, the final modifications to the systems were being carried out. Kind and his business partner have attracted talents from around the world to shape Simwave.

Sen Thanh Do from Vietnam is working on renderings of a vessel.

“He worked at the Vietnam Maritime Institute before he came to the Netherlands. He is very good at his job and is enthusiastic about the possibilities here at Simwave. We try to hire the best mathematicians in ship modelling, visual database developers and instructors.”

Recently, Cinthya Lopes from Brazil joined Simwave as a simulator operator. Lopes worked previously as an instructor in the Brazilian Navy and also with Kongsberg.

Marcel Kind is also the owner of Transafe, a maritime company that designs and supports processes, advises about the classification of dangerous goods and supports the industry concerning safety, health, environment and quality-related issues.

Two years ago, Kind met Joost van Ree, his current business partner, at the maritime exhibition Europort in Rotterdam. At that time Van Ree worked for a company that sold simulators. The two talked about the fact that a lot of companies want to use the services of a simulator, but do not want to invest in equipment itself.

“It is more cost effective to rent a simulator when you need it, instead of buying one. If you own a simulator, you have to be sure that the software is up to date and so on. We came to the conclusion that there was a market for an independent simulation centre.”

Two years after they met at Europort, Simwave is operational.

“In 2016 we did a lot of research. We spoke to potential customers and looked at the technical aspects of the plan. We found it very important that we could simulate the whole maritime cluster, from merchant shipping, the cruise industry, inland shipping, pilots, port authorities. But we also want to be of use to shipyards and the offshore and dredging industry. What makes Simwave special is that we are independent and are ready to work with everybody.”

To broaden its scope the centre does not only focus on training. The systems are also capable of testing vessels in the development stage.

“Simulators can also be used for applied research. We offer shipyards a place where they can test their designs. Also, they are often used at the commercial stage to convince customers to invest in a specific vessel type. In the case of a prototype, this is only possible on a simulator.”

With all the technology and recreated work areas, it takes little imagination to see Simwave as an onshore control centre for unmanned ships. But that is not something that Kind has in mind for the future.

“To be honest, I find all the attention for unmanned shipping a bit overdone. In the big picture, personnel does not represent the biggest costs in the budget. The world population is growing and people need jobs.”

“Of course I am in favour of efficiency, but there are bigger problems at the moment that can be addressed. I suggest that we put all the effort and money that goes into the research and development of unmanned shipping into making the maritime industry more sustainable. Invest in people and the planet. It seems to me that this has a higher priority than unmanned shipping.”

The owner of Simwave also believes in cooperation: “Simwave is available for everybody to use. We believe that cooperation in the maritime industry is very important. There is a lot of foreign competition, so when it is possible, we have to work together.”

With that in mind, Simwave can be a necessary addition to the Port of Rotterdam, believes Kind.

“Nowadays it is not only important how many tonnes pass through a port. It is also about the added value a port has to offer the maritime industry. We see that ports like Hamburg and Singapore are broading their services. There is an enormous amount of maritime knowledge in the Netherlands. Dutch companies are very innovative and research institutes like TNO and MARIN are known all over the world for their work. Simwave is a state-of-the-art simulation centre. Let’s combine forces to make the most of it!”

Kind and Van Ree have ambitious plans for the future.

“We would like to build similar maritime centres in different places in the world. In 2019, we are planning to open a second Simwave somewhere in Southeast Asia. After that, we will see if it is possible to expand to other places in the world that are maritime hubs.”

The two founders hope that Simwave will grow into a leading maritime institute.

“We would like to grow into a household name for the whole maritime cluster. We are ready to work with other innovative companies.”

This article was previously published in Maritime Holland edition #1 – 2018.